Tony Duhamel is a roulette computer purchaser who incorrectly applied my computer on videos at home, then claimed me device gave “random” predictions. So I challenged him to conduct live webcam testing of my roulette computer to refute his claims. The test was subject to strict rules to ensure I couldn’t cheat. The results were in my favour, which embarrassed Tony and he has since had a vendetta against me.

About the Public Challenge

Tony claimed that my roulette computer gave “random predictions” if it was used on the same video recorded spin. His logic was the computer couldn’t be accurate if predictions were random. I explained to Tony likely reasons why he would achieve such results and the correct settings to use, but he refused to accept the issue was his misunderstanding of instructions.

I explained to him that if he used the correct settings, then “if you test on the same spin with level settings, and change the reference point, the predictions are mostly within a 3 pocket arc”.  This claim was proven TRUE in a public challenge, even with basic settings and intentionally difficult conditions. Tony has tried to hide the results, and refuses a similar test where my computer and Forester’s FFA computer are connected to the same switch to predict simultaneously, to prove which is more accurate (this was done at http://www.roulettecomputers.com/diamond-testing/). 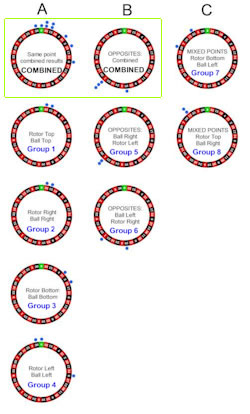 The actual results are left, and and what they mean is explained below:

A simplistic examination of the results would look at only these two charts (in the green box). But the reality is that much more needs to be considered as explained below. But even if we do analyze the results this way, still my claims are proven TRUE as detailed below.

Shown left are the combined charts with green areas showing 3 pocket arcs. There is a one pocket discrepancy because there are 37 numbers on the wheel, but it is insignificant. Keep in mind my claim which is “if you test on the same spin with level settings, and change the reference point, the predictions are mostly within a 3 pocket arc.”.

Taking into account the opposite reference point for the rotor, the results are that 46% of the dots are within a 3 pocket arc. Is 46% close to 50%? Close enough . . . which is why Tony tried to hide the results.

Now let’s look at a more detailed and more accurate analysis of the results . . .

First you need to understand how the ball decelerates on a real wheel. Click here to download one of the chapters from the roulette computer instructions. Pay particular attention to the part about the curve of deceleration of the ball, and how it is NOT smooth – it is wavey. This means if you use different reference points for the ball on a wheel with even slight tilt, you will find that when doing the different diamond test, using the same diamonds for the ball result in predictions being closer together than they are if you use a different diamond. Therefore is it impossible for the computer to maximize accuracy if you use different diamonds as reference points. After all, the computer will inevitably receive inaccurate or incomplete data. This is FACT. Anyone with good roulette knowledge can verify the reality of the ball’s deceleration curve. Moreover, the results from my test are consistent with this fact which further illustrates the results are legitimate.

So are most predictions within a 3 pocket arc? ABSOLUTELY and very easily.

* Vertical Column B is where I used opposite reference points for the ball and rotor, and thus we expect predictions to be opposite those in Column A.

* Vertical Column C is using reference points that are neither the same for rotor and ball, or opposite for rotor and ball. They are expected to be completely different from Columns A and B. The important point to note is each group has dots still close together. I explained it to Tony, but as usual he did not understand and thought Column C is related to Columns A and B. Forester would have known Tony’s explanation of the results was wrong, but why would he correct him? After all, Tony’s explanation suited Forester who is just as manipulative. I did expect this reaction though. He did the same thing with Viper’s incorrect understanding, but the recording is published for everyone to see for themselves.

It is important to note that the above clearly positive results were achieved in deliberately difficult conditions. See below for details:

Again my claim was “if you test on the same spin with level settings, and change the reference point, the predictions are mostly within a 3 pocket arc.”

Did I prove this?

If you take a simplistic analysis, without consideration to the difficulty of the conditions I created myself for the test, the result was than 46% of the predictions were within a 3 pocket arc. Close enough to 50? You decide.

As for the detailed analysis considering all variables and intentionally difficult conditions to prove my point, the results were:

If you understand everything here, you will be in no doubt that Tony has been misleading people. He has made numerous other false claims that are petty. I have only bothered to thoroughly address the most relevant false claims. While Tony is unprepared to admit his mistake, you can review everything and decide for yourself.